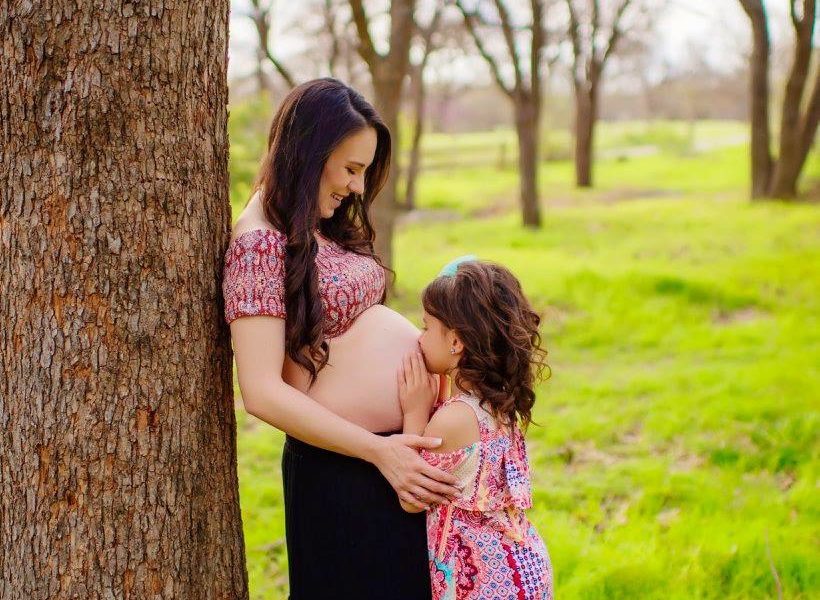 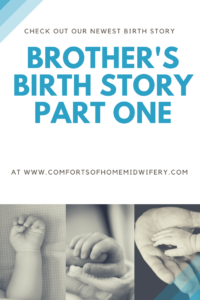 Kelli’s birth story first appeared on her own blog The Chronicles of a Recovered Know-It-All.  It was published on 5/6/18.  She has given me permission to share it here.  I have edited a few places for clarity.  – Mercy

After the trauma of Doodle’s birth, I made the decision, should I ever be blessed with more children, I would use a midwife and birth outside of a hospital. So much of my pregnancy and delivery with Doodle was overshadowed by the blood, sweat and tears shed on my way to recovery from opiates and a broken heart. The Lord is so good and so loving though. He has worked over the last seven years to release me from guilt, sadness and anger over what the enemy robbed from me during my first pregnancy.

[I will add this caveat right here: Yes I am a Christian. I acknowledge that sex before marriage is a sin. I have made many mistakes in my walk and I’m sure I am not done, but neither is The Lord. This is the story of how Jesus turned my sin into one of the most healing experiences of my life.]

On August 23rd, 2016, in my boyfriend’s (aka: SM) bathroom, I took a pregnancy test. I had a positive result and a genuine panic attack, complete with ugly cry, at the same time. SM and I had only been dating since May and here I was, a few weeks pregnant. (I guess you can say we REALLY liked each other). I immediately worried about what everyone else would say, the way the pregnancy would be perceived, how people would treat SM once they found out and I was certain my mama was NOT going to be happy with me.

I gathered my composer as I opened the bathroom door to find SM stand outside the bathroom door, with the “deer-in-the-headlights” look on his face. He had heard my meltdown and immediately know why. I was already a single mom, who had done every bit of the pregnancy, labor, delivery and parenting alone ( and apparently hadn’t learned a lesson), so I was prepared to do all by myself again. I looked at SM, patted his shoulder, said something along the lines of “well, this has been fun but shit just got real. I don’t believe in abortion, at all, so I’ll let you know when the baby is born.” and I headed for the door. He immediately stopped me, held my hand and said “ok, then we do this together”. He reassured me that everything was going to be okay and no matter what, he vowed he would be there, by my side, every step of the way. He suggested we take the time to truly get to know one another and I agreed. In that moment, two strangers, turned lovers, turned parents, decided that they were going to face this as a team. I was floored. I don’t think I had cried happy tears that hard since Doodle was born.

The next few months flew by like a blur. Not only did SM and I have to learn each other’s middle names, but we had to discuss things such as care providers, vaccines and circumcision. Having gone through literal hell on Earth with Doodle’s vaccine injury, I was steeped in research on the topic, which opened the door to the other topics as well. I am strongly vaccine choice (meaning I will not inject my kids with vaccines, but until they’re finally outlawed, every parent should have the accurate information to make the decision for their child(ren)), completely anti-circumcision, and 100% pro-midwifery. SM, on the other hand, a Marine with a Purple Heart, had more of the traditional “doctor’s know best, so we do what they say” school of thought.

It soon became clear that we did not see eye to eye on anything relating to pregnancy/birth/child-rearing. This was my first exercise in gently educating someone close to me, without negating their thoughts or feelings. I began by sharing resources (I will link a couple below) and having open, genuine, conversation. He agreed to watch some documentaries and read the studies on vaccines and circumcision, but he was terrified of having me birth at home. In return, I agreed to find a doctor that we both liked and to deliver in a hospital, that was mother and baby friendly (room share only, immediate skin to skin, delayed cord clamping, no injections for baby, intact friendly etc.). Part of me was heartbroken at my compromise but it wasn’t just me this time. I had a partner I needed to consider.

After meeting with three different doctors in three differently delivery centers, we could not find one that supported us in our beliefs or held the same values we did. Midway through my pregnancy, SM agreed to find a midwife but he was still not comfortable with a home birth. I was more than okay going to a birth center at this point. We were figuring this thing out together and that gave me incredible amounts of hope for us and our future. We immediately began interviewing midwives and birthing centers. Unfortunately, my pitiful excuse of an insurance plan did not cover a midwife or a birthing center. We made the disheartening realization that we would have to either take out a loan to pay for a birth center OR have a home birth for 1/3 of the cost. We decided to finish interviewing before we made our final choice.

We had our last midwife interview on a Saturday afternoon, in December. Inside the designated Starbucks sat a reserved, peaceful, soft spoken woman named Mercy. She is the owner and head midwife at Comforts of Home Midwifery. I am not a shy person…AT ALL. I can talk to pretty much anyone and tend to talk too much when I am nervous. I immediately noticed something different with her. There was a calm energy as we sat down to talk that I hadn’t felt in any other interview. SM is very quiet, profoundly selective with whom he allows in his world and certainly not a fan of strangers, but even he was calm and interacting! I started to feel an excited that maybe, just maybe, we had found our gal. Mercy looked us in the eye when she spoke, she didn’t give false information, nor did she try to tell us what kind of birth to have. What struck me was she spoke directly to SM. It sounds so insignificant, but not one of the other providers spoke to him like he present in the room. I was sold immediately. After getting in the truck SM said “I liked her but she only does home births. Let’s talk when we get home”. Later that evening we sat down to review our options. We very quickly decided that we wanted Mercy as our midwife. SM was still very nervous about us birthing at home, but he trusted me and I trusted my body, my baby and my midwife, so it all just made sense. 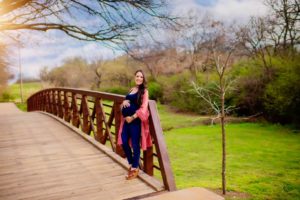 The second half of my pregnancy seemed to fly by and the next thing we knew, April was upon us. I had gathered all of the items for my birth box and had the birth tub set up and ready to go. Then….we waited. My first pregnancy ended with an unnecessary induction and a whole cascade of equally unnecessary interventions that followed. This time around, I was at the mercy of my body and my baby. For the first time in this whole process, I was nervous. Our guess date was April 28th, just a few days away. I had read many birth stories of moms going into labor on their guess dates and equally as many with moms going three weeks past their guess dates. It was anxiety inducing wondering which end of the spectrum I would be on. 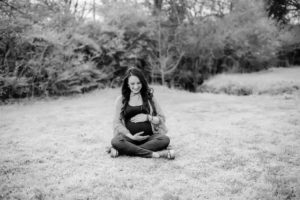 Fast forward to April 24, 2017. I had walked laps around our block so many times, the neighbors would sit outside and cheer me on. After returning home from my 4,000th trip around the block, I was hurting. I’m talking, lightening crotch combined with period cramps from hell, kind of hurting. Now, I was the queen of prodromal labor with my daughter and Braxton Hicks had been my reality for months already, so I tried to shake them off. As most of us who still rely on our mama’s to fix it when we don’t feel good, I called mama to complain about how bad I was cramping and how horrendous my lady bits felt. She asked “honey, are you in labor”? Well….I dunno? Was I? Could this be it?! Was my baby ready to make his earth-side debut?! Once mama got to the house and assisted me around the block a few more times, We decided to fill to birth tub and call my midwife. These pains were unlike anything I had felt before, so I preparing for things to go quickly! Mercy and her assistant arrived a little after 10:00pm. 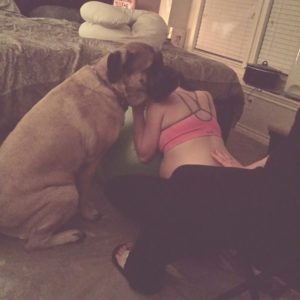 My mom spoke positive affirmations over me as she scratched my back while I labored on the birth ball. Our dog, Dixie, sat stoically by my side without moving a muscle. SM hovered nervously in and out of the room asking what he could do to help.

More waiting ensued. I noticed how tired I was getting! Mercy suggested I lay down. I was woken up, two hours later, to a smiling midwife informing me that she believes my labor has stalled. She was right. No more contractions. No more pelvic floor pain. No more “do I need to poop or push a baby out” feeling. I lost it. I broke down and cried. I apologized to everyone, profusely, for wasting their time. For the first time in my journey, I doubted my body and my baby. Mercy, as always, calmly reassured me that this happens, OFTEN, and despite my sobbing claims otherwise, I would not remain pregnant for all of eternity. Mercy and her assistant left and I became a complete hormotional (hormonal and emotional) pile of rubble.

There were so many emotions swirling around in my heart that completely overwhelmed me. My mom, thank God for her, decided to stay at our house until the baby was born, so she could be my doula every minute of every day. With SM’s PTSD as severe as it is, he struggles to connect and console people during times of extreme emotion, despite his every effort to. He supported me best by having my mother, the one person who has truly always been my ride or die, step in and comfort me. Some may find this strange but let me reassure you, my life gets plenty more weird than that, so hang onto your hat sister.

Elephant in the Hospital- Male Circumcision

Where to Start- Information on RIC

Functions of the Foreskin

Why Did RIC Become a Thing

Want to read more of Kelli’s story?  Part Two is here.  Like her story and want to see if home birth is right for you?  Contact me for more information.