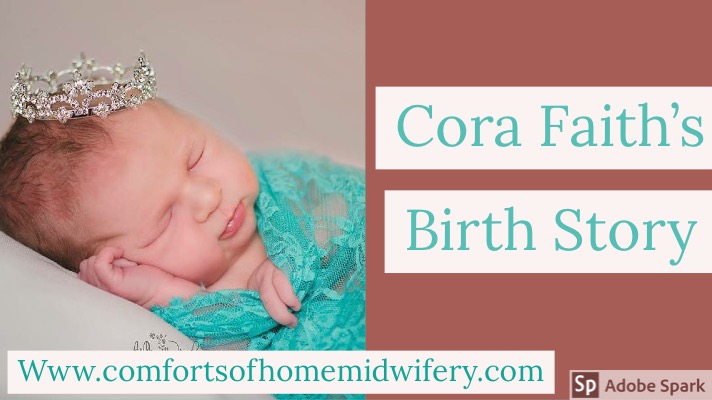 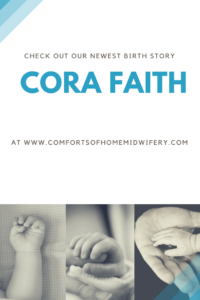 Here’s is our birth story of the newest member of our family. I wanted to begin with our decision to get pregnant again. A year ago we decided I would no longer be on hormonal birth control ever again. With that decision we talked over having another baby before making any permanent changes. After deciding that we indeed wanted another child we also decided we didn’t want to have a baby in our local hospital using any of the local doctors. We wanted a different experience, more natural and calming. One where Jason could be more involved and I wouldn’t be stuck in a hospital away from my family for days.

With that decision I signed up and went to the first Birth Without Fear conference in October. A week later we found out I was expecting. Armed with the new confidence and information that birth is normal and it’s ok to not use a ob/gyn, I started my search for our birth team. I knew immediately that I wanted a homebirth. I also knew who I wanted my Doula to be. Laney had already been such an amazing support I knew she was the right fit for me. I knew I wanted a midwife that would come to our home for all of the appointments. I wanted my other two children to feel comfortable with this person in our home. I also wanted a midwife to feel comfortable and confident in our home.

Let me tell you there are not many of these types of midwives available. After several months and several possibilities, we found Mercy. She was exactly what I wanted. Caring, compassionate, amazing with our son Jaxon, and hands off. She didn’t push me to do anything I didn’t want to do. At the beginning Jason and I had decided to take a very laid back approach to this pregnancy and birth. We chose not to have any ultrasounds and to have minimal fetal Doppler use. We wanted a pregnancy and birth as close to what it would have been like 100’s of years ago with just the comforts of our home and a birth team to support us.

Now for the night of the birth. I was 38w 3d pregnant. Technically ready, but I was not. I still had several things that needed to be done. I was just not ready. Monday morning I noticed some mucous discharge and asked Mercy if that was normal and possible mucous plug being discharged. She said it was possible but no big deal. I went about my day as normal. I went to Weatherford to do some shopping and pick up left over birth supplies from a friend. That night I had planned to take our daughter Alyssa to see a movie, but by the time we were to leave I was so so tired that Jason took her instead. I put Jaxon to bed and went to start planning for our blessing way that was planned for Saturday. Around 11, I got in the bath with some mild intermittent contractions that I had been having off and on for weeks. They slowed down so when Jason and Alyssa got home from the movie I got out and ready for bed.

Around midnight, Jason and I watched a TV show and started planning what needed to be done to prep for the birth. I started having intermittent contractions again. Nothing that had me worried, but I decided to try and stop them so I could go to bed, I rubbed lavender essential oil on my belly. By 1am they had not slowed so I started to time them so I could let Mercy know what was going on. After about 30 minutes of having contractions 3-10 minutes apart I decided to have a glass of red wine which calms the uterus and helps stop contractions if you are in false labor. I also discovered some blood with my mucous and I let Mercy know what was happening. Around 1:45, I laid down in the hopes that the contractions would stop. They did not stop but instead continued to get stronger and closer together. At 2am I texted Laney and the birth photographers to tell them what was happening. At 2:30, I got back in the bath hoping for some relief. It did not help.

We called to tell Mercy to come (her drive is over an hour) at that point the contractions were anywhere from 1-5 minutes apart lasting 30-90 seconds. They were still manageable and I was able to breath through them somewhat quietly. In just 15 minutes they got so much stronger that I needed Jason there for each contraction to do hip squeezes. I will never be able to thank Laney enough for teaching us about those. They are amazing and the best friend to any laboring mother. They are on the other hand the worst nightmare to a man of a fast laboring woman.

I got out of the water because I didn’t feel like it was helping anymore. I knew I was on the fast track to birth but I had no clue it would be as fast as it was. The next hour is a haze of dream like memories but according to my contraction counter, texts and phone calls I’m able to piece together the rest of the time frame. From 3am to 3:21am (when I wasn’t able to focus using my contraction counter app on my phone anymore), I had 9 contractions each stronger than the one before and each getting harder and harder to focus. I started getting extremely hot and nauseous with each passing contraction. Laney arrived around 3:30 and started getting the birth pool ready. The contractions were coming hard and fast at that point and I really wasn’t sure I’d be able to go at that rate for several more hours and admit I started to doubt myself in a little. Around 3:50 between contractions I noticed the bath still had water in it from earlier and I decided to get back in since it was still warm. The birth pool wasn’t even being filled with water yet. And I was just looking for any relief at that point.

After I got in, I checked my cervix even though I had no clue what I was doing but did feel my bag of water and the babies head about a inch in so I knew the birth was close. I had the strongest contraction and started yelling in a high pitch tone, Laney reminded me to lower my tone and focus. Another contraction hit immediately after and I reached down as I felt my body start to push and heard a noise come from my mouth that I’ve never heard before, to feel babies head crown. I took a breath, yelled, “My baby is coming”, and pushed.

In one single moment, I was holding a beautiful brown headed baby covered head to toe in vernix. It was just us. Mommy, Daddy, Baby. In a split second, after Laney walked in telling me to sit back as I sit back, Alyssa also walked in. She had only woke up from what was the roar of my voice. After a few minutes of pondering what had just happened, Laney asked what baby’s gender was. A girl! A sweet, calm, small baby girl. I will be honest and say, I was and still am in shock. It all happened so fast. I was not at all ready to have a baby that night. I was most definitely not prepared to have an unassisted birth. Laney called Mercy immediately to tell her things had progressed quickly and that baby was here. She arrived about 30 minutes after the birth. I am beyond happy that we had fully educated ourselves about home birth and hired a very well trained and experienced team. I am very sad that our birth was not captured. I wanted more than anything to have more than my own memory of this birth. From this I learned that all the planning and organizing of a birth is just that, a plan. Birth decides it all. A woman’s body is in total control and will move as fast or as slow as it wants. In the end I really did get the pregnancy and birth I had planned. Untouched.
We thank each and every person that supported our decision to go about this in a un-modern, unconventional way. With that we introduce to our friends and family Cora Faith Stevenson.

For more birth stories, visit our Birth Stories page.  For more information about our services click here or go to our Contact Us page.