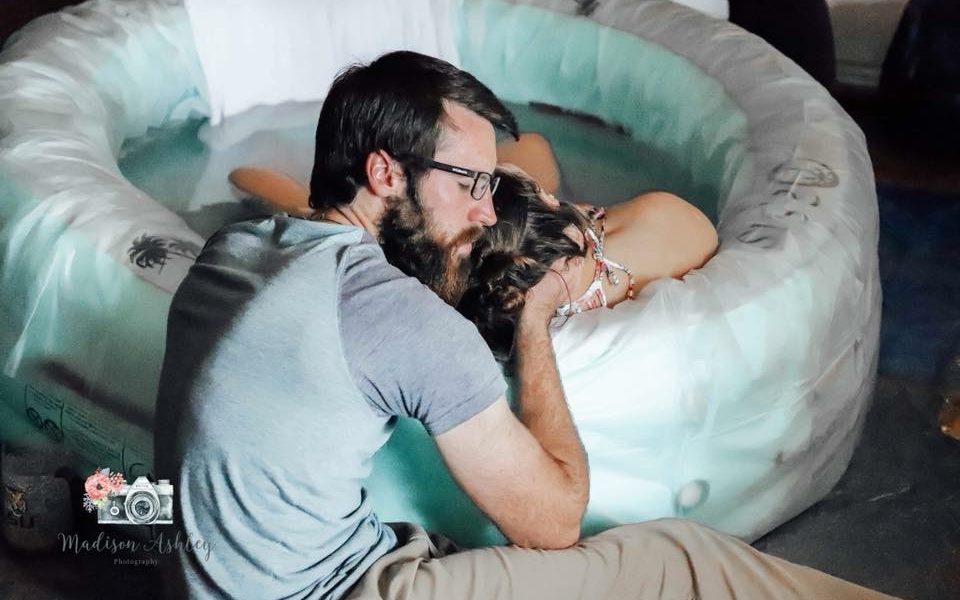 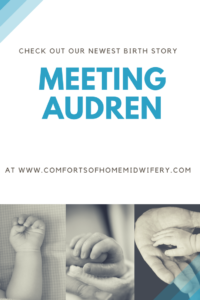 One week ago I got to meet my sweet Audren Joe Vinson.

It started around 11pm Monday, March 19th. Ryan and I had put Ryder down around 9 and we had just finished the first coat of paint in Ryder’s new bedroom. We sat down on the couch to relax and watch TV. He began rubbing my feet and small contractions began to flow. I was close to sleep when Ryan decided he was going to move to bed, but I decided I would try and sleep on the couch. The next few hours were a blur of dozing in and out and uncomfortable, but mild contractions.

Around 3am, I decided it was time to try a bath. My contractions, while still mild, were beginning to not like the laying position. It was during my bath I decided this was it, the real deal. I ate a snack, talked to my Nany (she just happened to be online at the time, which was nice because I was really bored at this point), and moved between the couch and recliner in an effort to find comfort. I managed to doze off for 45 minutes before it was officially too much to sleep through.

Around 5am, the idea of my baby Ryder not being the baby anymore hit me hard. I woke up Ryan, who began to get the house ready and then laid down with my first born. I held him hard, whispered how much I love him, but inevitably had to get up after two contractions, as they began to get painful.

Around 5:30am, I told my mom it was time to head our way. I was not midwife or doula ready, but I needed some “mom” comfort. We then began to prep the house for the coming day. Ryan laid out the tarp for the tub, I set up the supplies for easy access and we enjoyed each others presence before the chaos of our toddler and guest.

Around 9am, Geegee and Ryder took an adventure to the library for story time. I enjoyed a shower, and at 10:47 Ryan made a call to the midwives. Things started getting a bit harder to cope with and Ryan began to help me through contractions.

Around 1, my midwives and doula arrived. I was checked and was at 5cm. The next few hours were spent standing, laying in bed and trying to find some comfort, while setting up the tub. I labored mostly standing against the wall with Ryan, my mom, and Kameron, my doula, applying counter pressure and hip squeezes through contractions.

Around 2:15, I was struggling to cope with my labor pains and requested to get in the tub. This is where I found the most comfort. I was checked and was at 8cm. After not sleeping the night before and laboring through the day I was quickly hitting an exhaustion wall. I was able to find a spot, hold on to my husband and pray the Rosary through contractions. This allowed me to manage my contractions enough to sleep/rest between and barely show during contractions. I don’t think I opened my eyes for most of the hour and a half. This is also when everyone started bugging me, as they couldn’t tell when I was in a contraction and they seemed to only want to chat or give me water during them. 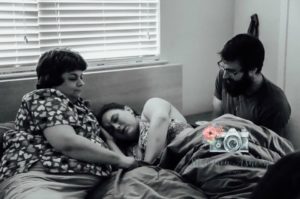 Around 6:15, after an hour and a half of resting in the tub, it was decided I needed some motivation after resting to get me to the end. I was ushered out of the tub and it was requested I sit on the toilet through a few contractions. I managed one, and decided it was not for me. I laid in bed against everyone’s wishes and tried to tune them out as they encouraged me. Finally after a room full of wonderful motivators, I got up, laid a pillow against the back of the toilet and sat backwards. This position allowed for gravity to take effect and caused my body to naturally start soft pushes through contractions. I finally began to “wake up”, drank apple juice between contractions, and began to perk up and prepare myself for my baby.

Around 7:15, I moved back to the tub, with a new found sense of preparedness, ready to birth my baby boy. I began laying against the wall of the tub in a sort of squat, with Ryan behind me applying counter pressure and whispering reminders of how powerful I was. It was here that I began pushing hard. After a few minutes my leg began cramping and decided to sit, laying against Ryan. This position felt so natural. Wrapped in my husbands arms I continued pushing sweet boy down. My water broke, and soon after baby boy began to crown. My midwives encouraged me to breath baby out in an effort to avoid tearing. Occasionally I was asked to push harder.

At 8:06, we welcomed sweet Audren Joe to the family. He was transferred immediately up to my chest where me and his daddy held him in awe. Weighing 9lbs 5oz just as his brother did, and 20.25 inches tall.

Holding my sweet boy, my midwife began encouraging me to deliver my placenta. After some time, and quite a bit of blood loss it became time to move from the tub to the bed. Dripping blood between the kitchen to the bedroom, my midwives, doula and mother helped settle me into bed. My body continued to hold onto my placenta. My midwives encouraged me to nurse and let me body know it was okay to let go. I continued to bleed. Eventually I was told we needed to cut sweet boy from his placenta, the home that nourished him for 41 long weeks. Daddy cut his cord, and it was requested I place a piece of the cord in my cheek to encourage uterine contractions to aid in releasing the placenta. My midwives, working quickly, almost as if they were dancing a routine they had practiced just for this moment, began to administer Pitocin, rub my stomach, and gave me a chlorophyll drink for my blood loss.

After much blood loss, I finally delivered my placenta and bleeding slowed to a more manageable level.

The next hour consisted of checking on sweet Audren, meeting big brother, uncles and his Dooda. Shortly after we were left just mommy, daddy and baby to spend the night resting and getting to know each other.❤

Did you enjoy Breanna’s story?  Read more on our Birth Stories page.   If you would like to find out more about having a home birth with us, contact us to set up a free consultation.