Skip to Content
Home / My Belated Christmas Gift by CM 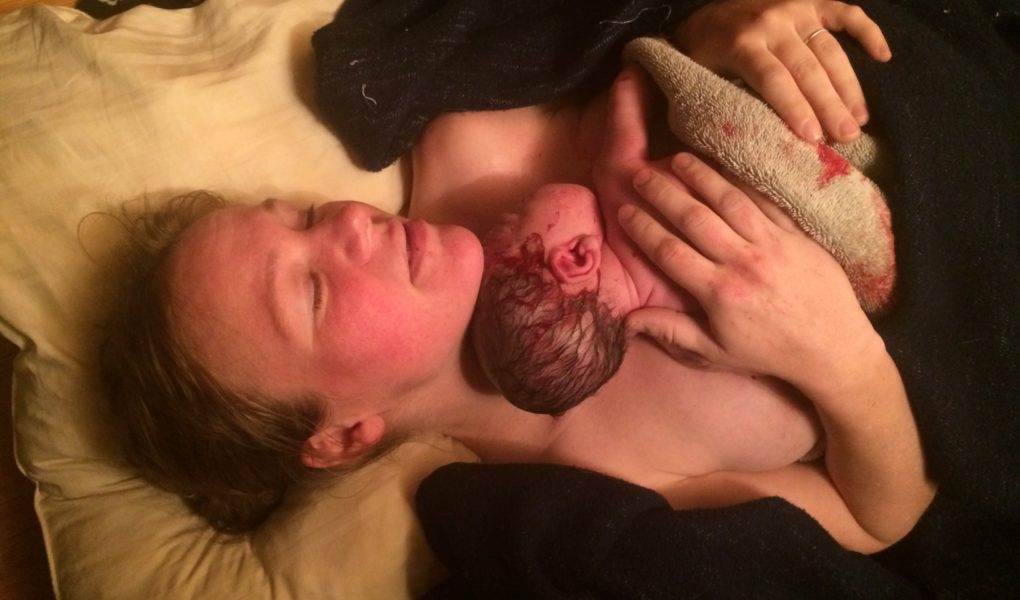 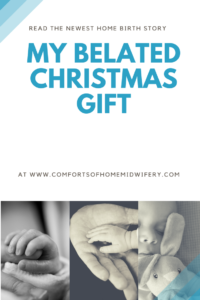 I didn’t ever think I would be one of those women who was fed up with being pregnant, but there I was, Christmas Day. I was 41+5, according to my LMP and my baby had been moving around quite painfully in my pelvis since week 38. As tempting as it was to try a natural induction, or anything that might kickstart labor, I was even more fearful of being in more pain as a result. So as I went to bed Christmas night, in pain and no signs of labor, I was feeling like I might lose my opportunity for a home birth. However, about 2 am, I awoke to the feeling that I peed in my sleep, which I haven’t done since I was a child! I got up and went to the bathroom as quickly as possible but I just ended up dripping amniotic fluid from the bed to the bathroom. I tried to wake up my husband to let him know that it’s time, but he barely responded. I knew he was going to need his sleep, so I laid back down and started feeling light energy waves like an ocean.
Early labor was a breeze and actually dwindled out. I called Mercy and my doulas to come over and then my energy waves had settled. Then after walking, eating and napping, the contractions came back with a vengeance! I was walking throughout the hotel room while listening to my husband’s beautifully hypnotic music (he’s a DJ and he writes music) and drowning myself in the rhythm. Then I sent him to the store for toilet paper and before he could get out the door, my first intense energy wave happened and it made me break a sweat! I told him that he had better leave quick before another one came and made him stay to hold my hand.
I tried to time them. Nope. I tried texting Mercy. It wasn’t working. These waves were bringing me to the floor! So, luckily, Mercy called me to hear me talk through a contraction and I couldn’t do it. I had to breathe through it. Not long after that, my husband came home and I told him, “It’s GO time! Mercy said fill up the pool!
The next hour is a blur, so I don’t remember the order of what happened but it was like it was rehearsed. My daughter came back from being with her father, someone called or texted my doulas to come back and everyone arrived within that blurry hour.
I loved the soothing warmth of the water, but wanted cold air on my face, which was hard for my support team, I’m sure. I didn’t want to be checked for dilation, so I was following my body and letting it do its work. Being someone who always wants to know how much time, or what time it is, this was hard for me to let go of and only focus on the present. I was amazed at the intensity and how involuntary it was when it was time to push. You hear so many stories yet nothing can prepare you for the experience. I roared my lioness roar and sang my birthing song. I connected with every woman who has ever shared her birth story with me. Each sensation was a reminder of the stories. I felt my great grandmother’s presence and my husband’s grandmother was there in spirit, too. I remembered Steven Gaskin’s quote from “Spiritual Midwifery” that says the entire universe shifts to make room for a new life. I was the universe shifting.

Pushing the baby out

I pushed for about 4 hours, I think. The first time I felt the baby move and push against my cervix, Mercy told me to go ahead and try to push with the next wave. I was chanting out a high pitched “Haaaaaaa…..” which wasn’t helping the energy push down, so everyone started chanting “OM…..” with me to help remind me to make low pitched sounds.
At some point, when it felt like forever and all I wanted to do was go crawl in bed and sleep, I turned to my husband who had been in the water with me the whole time. I said that I didn’t think I could do this anymore. I wasn’t thinking about transferring to a hospital. I was fine. Just done. He kissed me so sweetly and told me that he knows I can do it. He gave me my second wind.
I heard Mercy and Ashley whispering during one of my energy waves and then she suggested I try to go to the bathroom because I hadn’t gone in a while. The thought of peeing right then sounded ridiculous to me, but being a doula myself, I knew the real reason was probably to see if getting up and walking around again might help baby to descend. I did NOT want to sit down. Not even on a toilet, but Mercy gently brought me to the toilet as I was having another pushing wave! I got up immediately and needed to grab something to hang on to. Well, it must have been exactly what I was needing because I was crowning! I didn’t even think to go back in the water but I remembered that Mercy brought a birthing stool, so I called for it. Birthing in the bathroom wasn’t what I had in mind, but there I was and there I was going to stay.
Everyone crowded in. I began to feel an intense burning sensation, which was much more intense than I figured, based on what I had heard before. My husband knew that meant it was “the ring of fire” and that our baby was coming out! Then I felt that I was starting to tear on my clitoris! (Sorry for the TMI) No way was that going to happen! So I will spare you any more details on that, but Mercy saved me and I tore a little to the side of it. I was told that there was a hand coming out along with the head! I knew that I couldn’t just “breathe the baby out,” like I had read about so many times. I had to push harder and help my body. Mercy said that I had to push through the pain and that it’s like ripping off a band aid. Just brace yourself and do it!
And I did! My baby was finally earthside! Mercy handed baby to Daddy and he handed me my precious baby. I searched my baby’s face and said hello before I checked out the gender. “We have a little boy!” I announced to everyone! He looks just like his daddy!
My husband was able to perform a family tradition that was passed on to him by his father and his father’s father. He severed the cord with his teeth. The purpose behind this ritual is that it allows the father to have a roll in bringing the child into the world and bonding with the baby chemically (from the enzymes in his mouth getting into the cord), physically and spiritually. After that, the baby is officially named.
Tristan Mörin born via HBAC 12/26/2016
10:37 pm 7 lbs 8 oz

Did you enjoy this birth story?  Read more of my birth stories here.  Want to have your own birth story with Comforts of Home?  Contact me for more information.